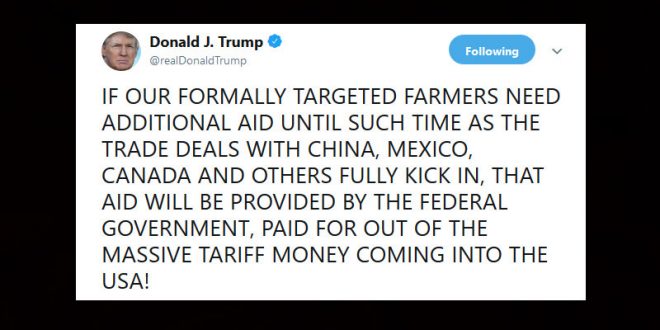 President Trump promised in an all-caps tweet Friday to provide additional bailout funding to American farmers if necessary, as questions arise over whether China’s purchases of agricultural products will fall short of what it pledged in the recently signed trade deal.

The bailout was created by the Trump administration as a way to try to calm outrage from farmers who complained they were caught in the middle of the White House’s trade war with China. In an attempt to pacify farmers, the Agriculture Department created an expansive new program without precedent.

The U.S. has already pledged or spent $28 billion in bailout payments to American farmers, an amount double the Obama-era bailout of the auto industry assailed by many Republicans. In some cases, that assistance has gone to foreign-owned firms with plants operating in the U.S.

IF OUR FORMALLY TARGETED FARMERS NEED ADDITIONAL AID UNTIL SUCH TIME AS THE TRADE DEALS WITH CHINA, MEXICO, CANADA AND OTHERS FULLY KICK IN, THAT AID WILL BE PROVIDED BY THE FEDERAL GOVERNMENT, PAID FOR OUT OF THE MASSIVE TARIFF MONEY COMING INTO THE USA!

You don’t need to tweet in all caps to yell about promoting socialism.

Funny how much Trump rallies against socialism and then provides farmers corporate welfare to make up for his disastrous tariffs.

Dear Leader: Is there a word to describe your philosophy of centrally planned agrarian economy?

Previous Downballot Republicans Launch “Socialism” Attacks
Next Miller To Staff: I Only Care About Stopping Immigrants