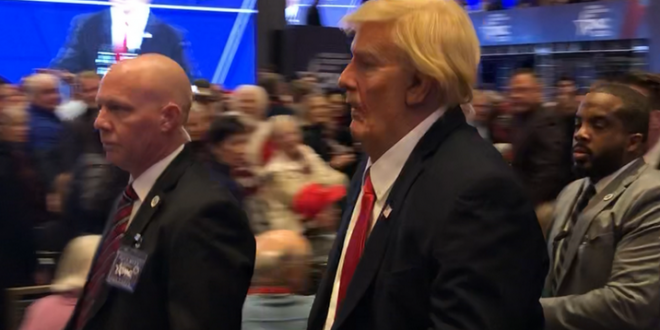 Mike Pence took the stage at CPAC 2020 around noon (eastern time) Thursday, opening his speech with a message of optimism about America’s odds of defeating the coronavirus, and Trump’s odds of reelection.

However, less than 10 minutes into the vice president’s remarks, a protestor dressed like the president stood up near the front of the audience and began yelling about Trump and “white supremacy.”

Secret Service and event security quickly apprehended the impostor, who was escorted out of the venue by about a dozen officers.

One attendee dressed up as Trump at CPAC begins yelling while VP Pence is speaking. He was just escorted out by police. pic.twitter.com/zdX2rE5yOe

Trump impersonator escorted out of Pence’s speech at #CPAC2020 after causing a disruption near the podium. pic.twitter.com/P8R2jXPlOl