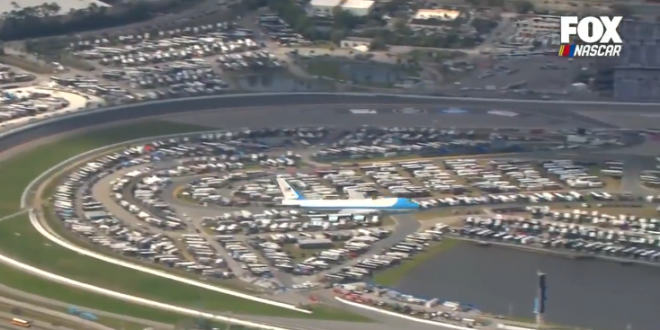 Trump Has Air Force One Swoop Over Daytona Track

President Trump might just have earned a couple hundred thousand votes on Sunday — even before he arrived at Daytona International Speedway. That’s how many people are attending the Daytona 500 in Florida, where Trump visited to serve as grand marshal for the annual NASCAR race. When Air Force One flew into the Daytona International Airport, right next to the speedway, the plane first swooped over the track at an estimated 800 feet. The crowd went nuts. Fox showed the flyby live.

. @realDonaldTrump just got on the radio from the Beast and said:

“Drivers, this is President Trump and it was an honor to open the Daytona 500, have a phenomenal day, have a great race, be safe, God Bless you, we love you.”

THIS IS EPIC #DAYTONA500 pic.twitter.com/Rp4Oc3pWn9

Trump can’t even handle a softball interview. Listen to him explain why he likes the Daytona 500!! 😂😂
He is the weirdest person on earth!! He couldn’t act normal if his life depended on it. Does he even know what he’s talking about? 😂😂 Embarrassing!#DAYTONA500 #Daytona pic.twitter.com/VMIrOCfk7B

WATCH as Trump takes first lap at Daytona in “The Beast” pic.twitter.com/21oJA2oOzJ

Trump is in attendance at the Daytona 500 today, where his campaign has sponsored a car.

We thought it might be more prudent to use the car to revive Trump’s failed businesses.

Come November, he’ll be needing something to do. pic.twitter.com/Y7yeKxKrfM