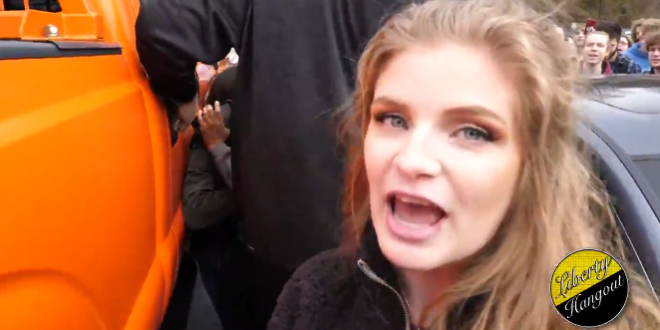 Trump Cultist “Gun Girl” Met With Wild Protest At Ohio College, Calls For Trump To Defund Them For Terrorism

Gun rights activist and Kent State graduate Kaitlin Bennett was greeted by a crowd of screaming protesters when she visited Ohio University Monday. Bennett came to internet fame for taking a celebratory stroll around campus carrying a semi-automatic rifle after her graduation from Kent State University in 2018.

A video she posted on Twitter, referring to it as a “riot,” showed a crowd of students yelling and throwing drinks at her car as they drove slowly through the campus. “This is what happens when a Trump supporter goes to a college campus,” she said. “I think @realDonaldTrump should strip funding from universities like this that harbor terrorists.”

When Bennett and her “Liberty Hangout” tour arrived at Ohio University on Monday, students greeted her vehicle by throwing beverages in her direction and giving her the middle finger. Ohio University reached out to 3News on Monday evening with the following statement that they also posted on Twitter.

“Contrary to allegations circulating on social media, the incident did not rise to the level of a riot,” Ohio University stated. “There was strong language and allegations that some unknown person(s) in the crowd spalashed water, but there were no reported injuries or violence, and no one was arrested during the event.

Bennett has also brought her camera crew to LGBT pride events where she ridicules attendees under the guise of questioning them about transgender rights.

This is what happens when a Trump supporter goes to a college campus. Leftists at @ohiou started a riot when @Joelpatrick1776 and I showed up, and the @oupolice let it happen. I think @realDonaldTrump should strip funding from universities like this that harbor terrorists. pic.twitter.com/5TMlfdto9O

The @oupolice lied and said that no violence happened and that there were just “allegations that some unknown person splashed water.” Students at @ohiou were throwing things at me all day, dumped hot coffee on me, & vandalized @Joelpatrick1776‘s truck right in front of the cops. pic.twitter.com/XnMUqFWtrH

I will absolutely be returning to @ohiou‘s campus again, and next time I’ll bring an army of gun owners for an open carry walk through campus. You can’t keep us away and you can’t keep us silent. Just like Donald Trump, we will always win.

3 meetings with student conduct, 2 expulsion attempts, and a petition to get my student group kicked off campus.. all for nothing. I graduated & the left did not win.