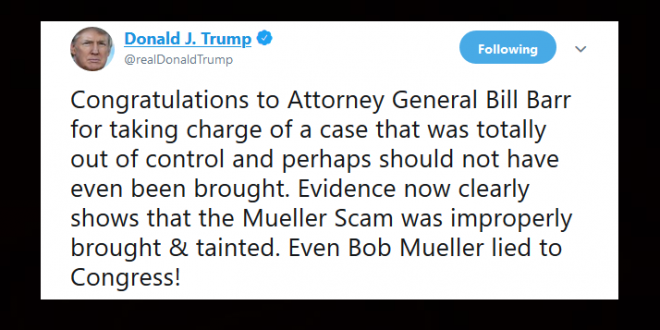 President Donald Trump boasted that Attorney General William Barr was corrupting the Department of Justice to help out his friends caught up in the Russia probe. Four prosecutors abruptly resigned from Roger Stone’s case after Barr appeared to intervene and reject their sentencing recommendation, and Trump removed all doubt that his attorney general was involved in a Wednesday morning tweet.

Congratulations to Attorney General Bill Barr for taking charge of a case that was totally out of control and perhaps should not have even been brought. Evidence now clearly shows that the Mueller Scam was improperly brought & tainted. Even Bob Mueller lied to Congress!

congratulations to the president’s hand-picked goon at the department of justice for setting aside his oath to defend the constitution and choosing act instead as the president’s personal attorney. you sure know who butters your bread, Bill

President Trump acknowledged this morning that Attorney General Bill Barr intervened in the Roger Stone proceedings, congratulating him for “taking charge of a case that was totally out of control.” https://t.co/IpPGH5DSoe

With yet more politicization of prosecutions Bill Barr builds his reputation as the most corrupt Attorney General in American history.