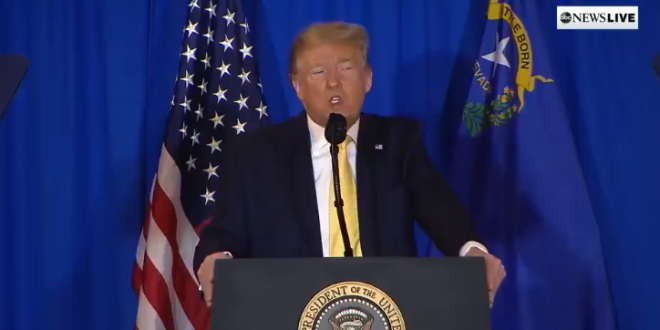 President Donald Trump said Thursday he won’t act to grant clemency to his friend and former associate Roger Stone right now, saying he wants the process to play out before making a decision.

“I’m not going to do anything in terms of the great powers bestowed upon a president of the United States, I want the process play out, I think that’s the best thing to do,” Trump said in Las Vegas. “Because I’d love to see Roger exonerated and I’d love to see it happen because I personally think he was treated very unfairly.”

The President didn’t rule out an eventual pardon or commutation, but said the process should play out first. “At some point I’ll make a determination, but Roger Stone and everybody has to be treated fairly. And this has not been a fair process,” Trump said.

Trump targets the forewoman of the Roger Stone trial, calls her an “anti-Trump activist” while speaking to the Hope for Prisoners Graduation Ceremony. She “had an awful social media” and is a “dominant” person. People have been targeted for harm based on Trump’s attacks before. pic.twitter.com/fsujbCEfrS