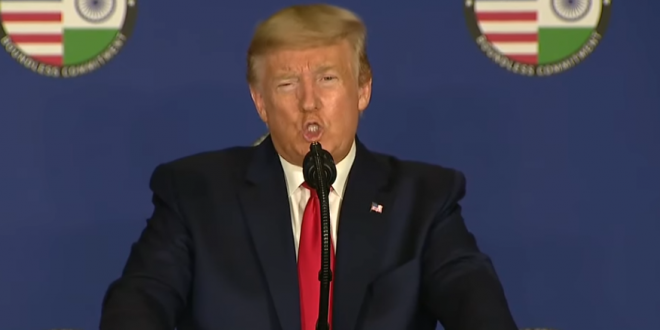 President Donald Trump said Democratic presidential front runner Bernie Sanders is advocating “totally unaffordable” policies that are “not going to work” during a meeting with business leaders Tuesday at the U.S. embassy in New Delhi. “When we win re-election – I think we will – when we win, I think the market’s going to go up, it’s going to be like a rocket ship, like last time, but even more so,” Trump said. “I think the fact that the Democrats are so radical, so out of control, they honestly don’t know what they’re doing.”

Past presidents typically shied away from discussing domestic politics while on foreign soil, but Trump has seldom abided by that particular tradition and often laces into his opponents back home while overseas. He went on to blame the election season for holding down the value of the stock market, saying that investors are worried Sanders and other candidates had “a real chance” of winning the presidency. The U.S. president is in India on a two-day state visit.