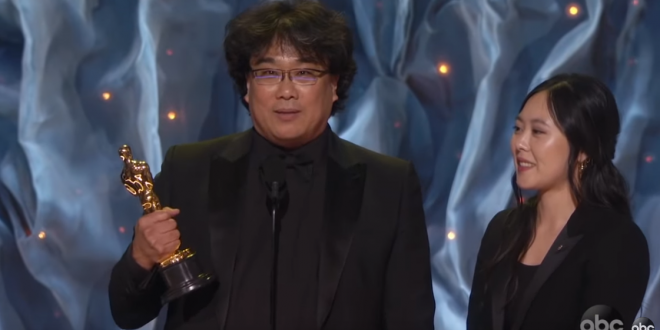 At Sunday’s Oscars, on a night when almost everything went as planned and as usual, the one true surprise came in the biggest moment of all. For the first time ever, a film in a foreign language won best picture when Bong Joon-ho’s Parasite, a comedy-drama-thriller about class and secrets, took the big prize.

Bong also won the awards for best director and best original screenplay. He delivered three warm and generous speeches, including one when he won for his directing and thanked fellow nominees Martin Scorsese and Quentin Tarantino for inspiring him and boosting his career, respectively.

Barack and Michelle Obama’s production company scored an Oscar win on Sunday for “American Factory,” a documentary that chronicled what happened to workers when a Chinese billionaire purchased a manufacturing plant in the U.S. Midwest.

“American Factory” is the first release from their company Higher Ground Productions, which the former U.S. president and first lady founded in 2018. In that same year, they announced a multiyear deal to supply content to streaming service Netflix.

Congrats to Julia and Steven, the filmmakers behind American Factory, for telling such a complex, moving story about the very human consequences of wrenching economic change. Glad to see two talented and downright good people take home the Oscar for Higher Ground’s first release. https://t.co/W4AZ68iWoY