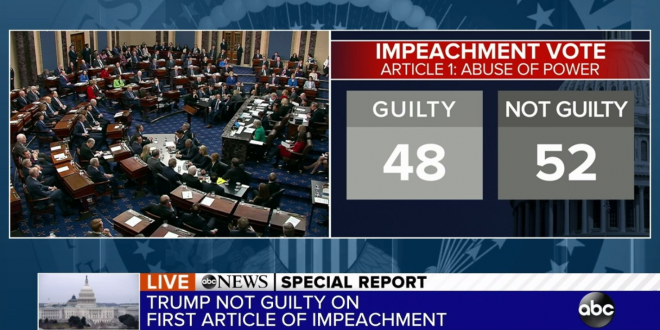 The Senate acquitted President Trump on Wednesday of charges that he abused his power and obstructed Congress, as Republicans turned back an election-year attempt by House Democrats to remove him from office for pressuring a foreign power to incriminate his political rivals.

The tally for conviction fell far below the 67-vote threshold necessary for removal and neither article of impeachment garnered even a simple majority. The first article, abuse of power, was rejected 48 to 52, and the second, obstruction of Congress, was defeated 47 to 53. Senator Mitt Romney, Republican of Utah, was the only member to break with his party, voting to remove Mr. Trump from office.

The votes, ending the third presidential impeachment trial in American history, were a resounding victory for Mr. Trump after five months of blaring scandal over Ukraine that embroiled Washington and threatened his presidency. But both sides agreed that the final judgment on Mr. Trump will be rendered by voters when they cast ballots in just nine months.