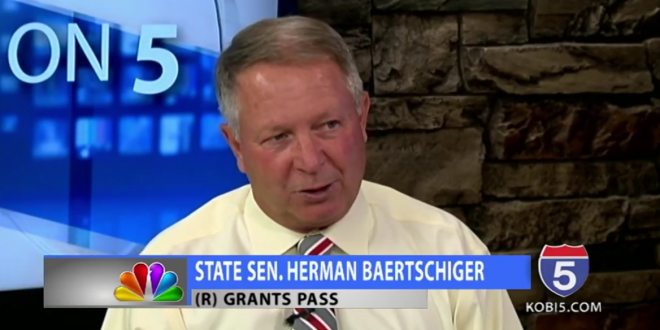 For the second consecutive legislative session, Senate Republicans have walked out of the Oregon Capitol to block passage of a greenhouse gas emissions cap-and-trade bill. “The Republicans who walked out are not against climate policy, they are against the democratic process,” Gov. Kate Brown said. “Oregonians should be outraged and I am, too.”

Democrats hold a supermajority of 18 members, but a walkout denies the Senate a two-thirds quorum of 20 needed to conduct any business on the floor. Senate Republicans deployed this tactic twice during the 2019 session — first in protest of a multibillion dollar education revenue package and then against House Bill 2020, the previous cap-and-trade bill.

The Senate’s Republican leader, Herman Baertschiger Jr. [photo], said in a statement that Democrats had refused to work with Republicans and had voted down all their proposed amendments. “Senator Courtney’s actions leave no other option for Senate Republicans but to boycott and deny quorum,” Mr. Baertschiger said.

The state’s Constitution requires two-thirds of senators to be present before voting can take place. Democrats hold 18 of the chamber’s 30 seats, meaning they need two Republicans to join them to reach a quorum.

While the cap-and-trade proposal has changed over time, the dispute mirrors what occurred last year, when a similar proposal led Republicans to leave the state to avoid potential roundup by state troopers sent by Gov. Kate Brown, a Democrat.