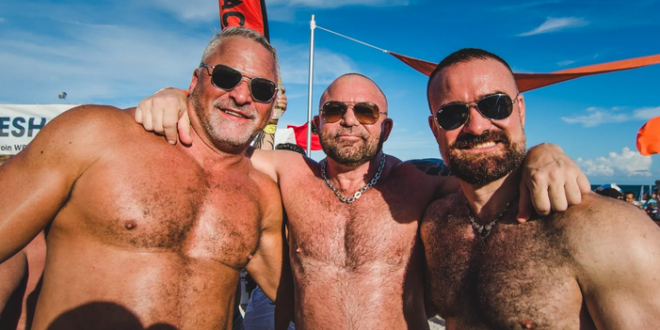 Let’s take a break from election infighting and virus doomsday scenarios for a thirsty look at next week’s Winter Party Festival, Florida’s longest-running and largest LGBT charity event, which has raised millions for local HIV/AIDS and LGBT rights campaigns.

From the organizers at the National LGBTQ Task Force:

Our work to lift barriers related to HIV/AIDS reaches across a number of focus areas. In our advocacy with Immigration and Customs Enforcement (ICE), we promote increased access to physical and mental health care for LGBTQ detainees, with a strong focus on access to transition-related and HIV/AIDS-related care. We work to ensure LGBTQ homeless youth have access to HIV/AIDS prevention and treatment programs..

The National LGBTQ Task Force serves on the LGBT and HIV Criminal Justice Working Group. Together with our partners we’re working to provide access to clean syringes, modernizing HIV criminalization laws, and ensuring returning citizens have access to HIV prevention and treatment.

Finally, we’re acutely aware of the structural barriers faced by communities experiencing alarming rates of HIV/AIDS and are committed to eradicating those barriers. These communities include LGBTQ people of color, people engaged in sex work, youth experiencing homelessness, transgender women, and people who inject drugs.

In addition to the long list of events, this year’s Winter Party Festival will focus on educating attendees on the Task Force’s Queer The Census campaign.

Every ten years our federal government conducts the Census, a count of every person residing in the United States, so that they can allocate funds for programs like Medicaid, public housing, and food stamps, and so that they can make sure that our federal, state, and local elected officials are representing roughly the same number of people.

This year the  National LGBTQ Task Force is coming out in full force during Winter Party week in Miami to ask our community to fill out the upcoming US Census.

Visibility matters and the metrics used by the Census dictate how our tax dollars get allocated and budgeted. This impacts all of us and it is time that we are properly reflected to the federal government.

NOTE: This isn’t a paid or sponsored post, I just adore Winter Party because I’ve attended many times since the very first one (when I still lived down there) and because over the years their all-volunteer events have raised millions for South Florida’s LGBT and HIV/AIDS causes. I also appreciate that Winter Party is one of the few major dance events that draws a significant number of bears and eldergays. Really!