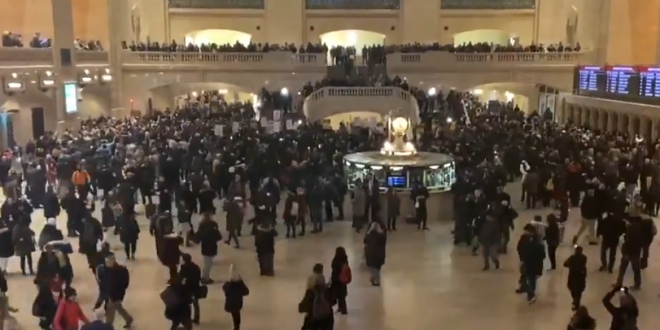 There were multiple arrests after protesters gathered at Grand Central before taking to the streets Friday night. Police struggled to hold back the elbow-to-elbow protesters covering the main floor of Grand Central Terminal.

The group started gathering just after 5 p.m., many wearing masks and carrying anti-police posters. Some tried to hang banners in the terminal, all aiming to disrupt the evening commute.

Three masked members of the protest group could be seen in a Twitter video encouraging people to skip fares, damage turnstiles and engage in a mass sabotage of the MTA, pointing followers toward a demonstration at Grand Central. The group says it wants to abolish subway fares and get rid of police patrols in the transit system.

The agitators — who want police completely out of the subways and transit to be free — secured emergency gates open with bike locks, zip-ties and violin strings, rendered turnstiles useless with glue and spray paint and littered buses, stations and trains with “Fuck cops, fuck MTA,” “Free transit ” and other anti-cop, anti-MTA messages.

“We encourage you to link up with your friends, your family and think of the ways you can move in affinity to fuck shit up on J-31 all day long,” a masked man said in a video posted to the Twitter page of “Decolonize This Place,” the group organizing the demonstrations, ahead of the day of protests.

Watch the video at the bottom. Whoa.

“This Subway Is Liberated”

These are OUR trains, Pigs out of MTA!!!
#FTP #decolonizemta pic.twitter.com/5RpNPuMVQo

Someone used a bike lock on an exit door to prevent it from closing. Respect to comrade u-lock for supporting today’s fare strike as part of J31. Cops out of the subways and free public transportation! Follow @decolonize_this for updates today, and be at Grand Central at 5pm. pic.twitter.com/qQ1Wli5MPO

Now I’m in Grand Central for the #FTP3 protest that’s about to start. Here’s who was greeting subway riders outside the subway. pic.twitter.com/MO55NAckSt

Previous John Kelly: The GOP Only Gave Trump “Half A Trial”
Next Major Transit Union Flips From Sanders To Biden