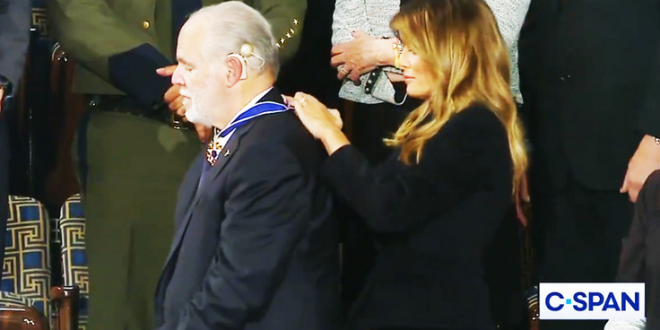 Limbaugh Mocks Dems In Radio Return After Cancer Treatment: Their Hatred Is A Poison, It Destroys Them

A resilient Rush Limbaugh returned to his golden EIB microphone on Friday after missing three episodes to undergo cancer treatment just in time to mock the “implosion” of the Democratic Party and downplay his diagnosis as something with which “millions of Americans” are also dealing.

“What a week. What an incredible week,” Limbaugh said at the top of the program, on the heels of Monday’s shock announcement that he’s been diagnosed with advanced lung cancer and being presented with the Medal of Freedom at President Trump’s State of the Union address on Tuesday.

Limbaugh told listeners that the Democrats have “lost their entire moral foundation” because they became consumed with hatred. “Hatred is a poison, it destroys you,” he said. “Hatred can never make you happy.”

Years before conservative radio host Rush Limbaugh announced on his show Monday that he’d been diagnosed with advanced lung cancer, he downplayed the health risks of smoking on his show. During a discussion with a caller to “The Rush Limbaugh Show” back in April 2015, Limbaugh denied second-hand smoke was a danger and said it takes 50 years for smokers to get cancer.

The caller was questioning Limbaugh’s logic that society should be thankful for smokers because of the tax money generated from the sale of tobacco products. After asking who smokers were harming, Limbaugh denied second-hand smoke caused any deaths. “I would like a medal for smoking cigars, is what I’m saying,” Limbaugh added. “I’ve never seen cause of death: Tobacco products.”

Rush Limbaugh was awarded the same Medal of Freedom once presented to Mother Teresa. Here’s a reminder of the hateful ideology he’s built his career on. pic.twitter.com/1XOA6nqKwW