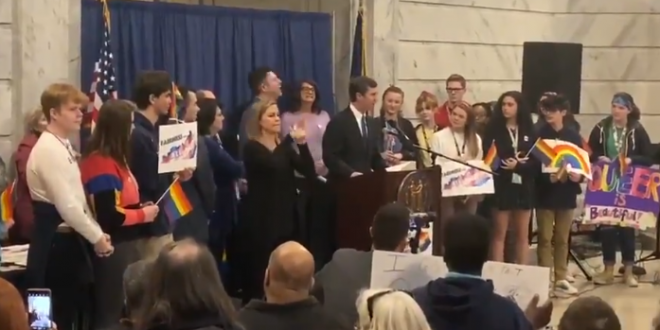 Gov. Andy Beshear spoke against discrimination based on sexual orientation and gender identity and supported a ban on conversion therapy for LGBTQ youth during a historic appearance at a gay-rights rally Wednesday at Kentucky’s Capitol.

Beshear became Kentucky’s first sitting governor to attend a rally staged by the Fairness Campaign in the Capitol Rotunda, a few steps from the governor’s office. The rallies by gay-rights supporters date back to the 1990s, activists said.

The Democratic governor received loud cheers from the crowd. “Diversity and inclusion, they aren’t buzz words,” Beshear said. “They are values. And they are keys to making Kentucky stronger. Kentucky cannot reach its full potential if all of our people don’t feel supported to be themselves.”

“And I am proud to be the first sitting governor to attend this Fairness rally,” Gov. Andy Beshear told the crowd assembled in the Capitol Rotunda. He is supporting bills to ban discrimination against LGBTQ Kentuckians and outlaw conversion therapy. https://t.co/f58leib1Ye

Gov. Beshear is the first governor to speak at the statewide fairness rally in the capitol. pic.twitter.com/zOdcbGKZfW