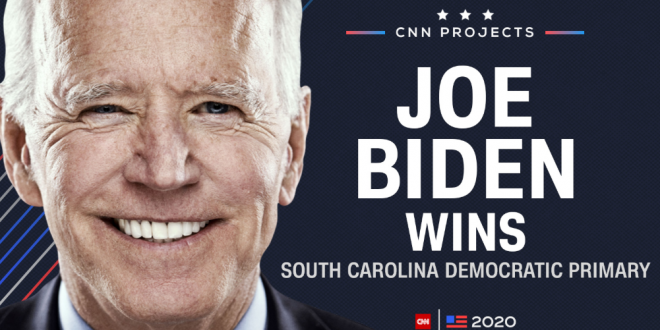 Joe Biden has run for president three times, and yet until Saturday he had failed to ever win a primary or caucus. The 77-year-old former vice president has now gotten an expected but much-needed victory in the South Carolina primary, according to the Associated Press’s projection.

The crucial win has the potential to resurrect Biden’s campaign after a series of poor finishes in the other early voting states (fourth place in Iowa, fifth place in New Hampshire and a distant second in Nevada).

A majority of Democratic primary voters in South Carolina are African American. And pointing to polls, Biden has long insisted that he has more support from black voters than any other presidential candidate, and that the Democratic nominee will need strong backing of African American voters to win the general election.

Now we wait for delegate allocations.

#BREAKING: Joe Biden is projected to win the South Carolina primary, according to the AP. https://t.co/hqFiix2Exx pic.twitter.com/qUueDHVPRU