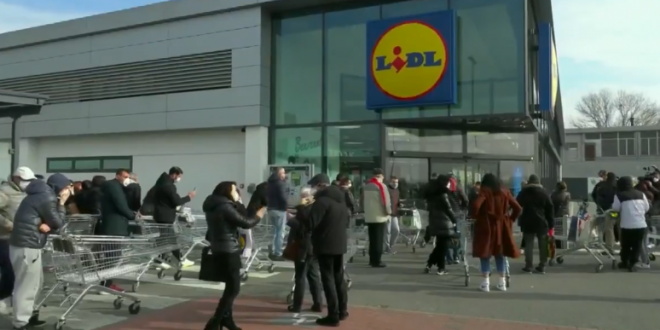 More than 50,000 people are locked down in about a dozen Italian villages where the most deaths and infections have been recorded. Schools, shops and offices are closed and armed police are threatening to arrest and detain anyone who attempts to leave the quarantine zone.

Panic is taking hold in the nearby city of Milan, the engine room of Italy’s economy, home to 1.3 million people and the nation’s world-renowned fashion industry. Worried residents have emptied shelves in a number of supermarkets.

Schools, government offices, cinemas and some banks were also closed in Milan, while police in the nearby village of Binasco warned that con-artists were pretending to be paramedics and visiting houses to carry out free swabs only to rob people once inside.

Meanwhile in Venice — capital of Veneto — the situation is complicated by the fact that the city is in the middle of its annual carnival, one of the largest tourist events in the Venetian calendar. Before it was canceled, it was due to run until Tuesday, which meant an increased number of visitors, putting greater strain on local authorities.

Luca Zaia, the president of Veneto, confirmed on Sunday that there had been several dozen cases in the region, including two in the city of Venice. He said that private and public meetings were banned until March 1.

The people of Venice are letting their frustrations be known. Roberto, who works at a bar in St. Mark’s Square, said, “Why are they here? Why aren’t we blocking them,” while pointing to a group of Chinese tourists. “This could have been avoided if we closed the ports, blocked all flights coming from China, Korea, Japan.”