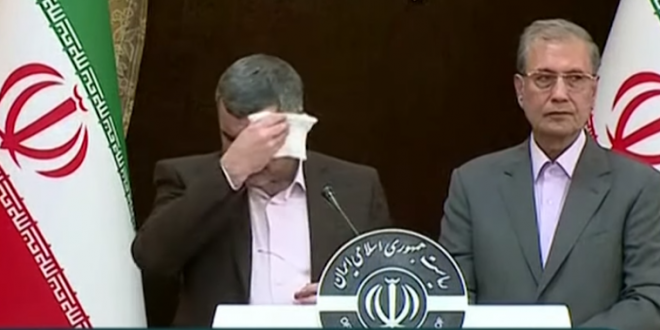 Iran’s deputy health minister, Iraj Harirchi, who has spearheaded the country’s efforts to contain the coronavirus, has contracted the illness, the Health Ministry said on Tuesday, renewing concerns about the spread of the virus in the country. In an interview with the state-run news outlet IRNA, a spokesman for the ministry said that Mr. Harirchi had been experiencing weakness and flulike symptoms on Monday before holding a news briefing, and tested positive for the virus later in the day.

It is unclear how he contracted the virus, but health officials said he had been dealing with some patients suspected of having the coronavirus. During the briefing, Mr. Harirchi could be seen repeatedly wiping sweat from his brow and shifting uncomfortably from foot to foot. On Tuesday, he posted a video from home detailing his diagnosis and self-quarantine.  A prominent member of Parliament, Mahmoud Sadeghi, an outspoken critic of the country’s hard-liners, posted on Twitter that he also had the virus.

#Iran’s reformist & outspoken MP Sadeghi who had earlier said he doesn’t have much hope to survive #CoronaVirus has published a new video saying “I’m in a very good condition. I didn’t want to worry you…We’ll overcome the virus with national unity & observing health principles” pic.twitter.com/AsTzsYOXAK

The head of Iran’s counter-coronavirus task force has tested positive for the virus himself, authorities announced Tuesday, showing the challenges facing the Islamic Republic amid concerns the outbreak may be far wider than officially acknowledged. https://t.co/d0mrtDM5TF pic.twitter.com/P47fzFCg5P