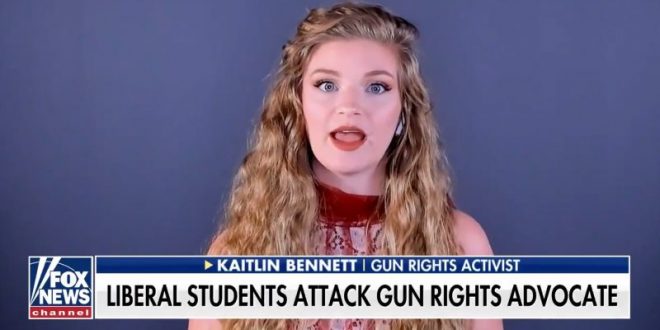 Kaitlin Bennett, a correspondent for the conspiracy theory outlet Infowars and employee of the far-right outlet Liberty Hangout, appeared on Fox News’ “Fox & Friends First” program Wednesday morning, where she asked the president to support conservatives on college campuses.

Bennett’s appearance on Fox News came after she attempted to make a video on Ohio University’s campus Monday and was confronted by a crowd of angry protestors. The incident has been lifted up by national conservative media as the latest instance supporting its well-worn college campus outrage machine.

Since the incident, Bennett has leaned into the opportunity, using her experience to echo right-wing campus organizing groups’ existing demands that universities who do not sufficiently protect conservative views on their campuses be ineligible for federal grants.

As you can see in the clip, Bennett implores directly to Trump on camera, a tactic that has worked quite well for others, as we all saw with yesterday’s pardons.

For 4 years now, leftists have protested @realDonaldTrump over lies that can easily be debunked. On Monday, you witnessed hundreds of college students protest me over lies. In the age of technology, the left chooses to be wilfully ignorant of literally everything.

I went on @foxandfriends this morning to discuss the riot at @ohiou on Monday and to send a message to @realDonaldTrump that public universities should NOT receive federal funding if they’re going to allow violence against conservatives. pic.twitter.com/ultt8NxpiA

All of my unemployed haters should be thankful for how much I’m contributing to their welfare this year. You hate me, but I pay for your college, your healthcare, and your food stamps. April 15th should be renamed Be Grateful to Kaitlin Bennett Day!

I will absolutely be returning to @ohiou‘s campus again, and next time I’ll bring an army of gun owners for an open carry walk through campus. You can’t keep us away and you can’t keep us silent. Just like Donald Trump, we will always win.

Previous “Monkey Menace” Could Spoil Trump’s India Visit
Next Woman Convicted In $205M Medicare Kickback Fraud Scheme: President Trump Has Given Me My Life Back