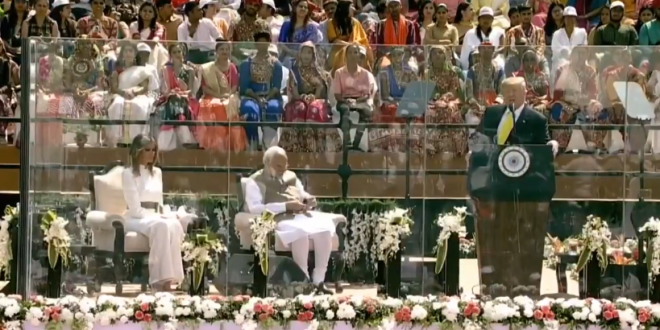 There were women in glitzy Indian garb dancing, Bollywood stars singing and an eclectic mix of music blaring in time to flashing lights. And when President Donald Trump finally appeared on stage at the world’s largest cricket stadium, the sun-soaked crowd burst into a deafening, rapturous applause. It was exactly the scene the TV star-turned president wanted. “Namaste Trump!” Indian Prime Minister Narendra Modi shouted to the crowd, which repeated it back to a beaming Trump.

Standing alongside Modi, Trump on Monday inaugurated the brand-new Motera Stadium, lined with 110,000 orange, yellow and blue seats — all filled. Trump is ostensibly in India to help mitigate a long-standing trade dispute, but Monday’s mega-rally was also designed to appeal to Indian-American voters as Trump heads into his reelection campaign. It was a political-style rally like no other. Even Trump’s popular MAGA rallies couldn’t compare to the size and scope of the “Namaste Trump” rally.

The whole event took on the atmosphere of one of Trump’s political rallies, complete with the Elton John playlist. And that, aides say, is what Trump was looking for when he agreed to travel 8,000 miles for a night in India: an uproarious reception and the biggest crowd he’s ever drawn.

Before he arrived, Trump placed his expected crowd count for his “Namaste Trump” rally in the range of 6 to 10 million, but given the city’s population of 8 million and the stadium’s capacity of 110,000, those figures seemed high.

Whatever the final number, the crowd was massive, including along Trump’s motorcade route, where thousands of hand-selected members of Modi’s Bharatiya Janata Party welcomed him into Ahmedabad in India’s northwest.

Our two national constitutions both begin with the same three beautiful words: “We the people.” That means that in America and India alike, we honor, respect, trust, empower, and fight for the citizens we proudly serve! 🇺🇸🇮🇳 pic.twitter.com/hfKKSqlVfe

Trump praises “unity” in India even as Modi’s government has rounded up thousands of Muslims in Kashmir and passed a sweeping new citizenship law favoring every South Asian faith other than Islam.

Trump stands in front of a Taj Mahal that he didn’t bankrupt, for a change. pic.twitter.com/VPLaHQUaQ1