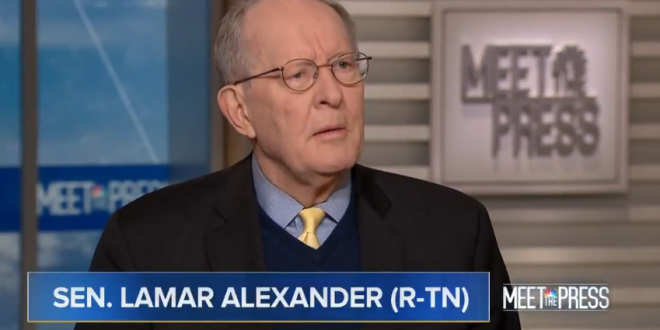 Sen. Lamar Alexander (R-Tenn.) said on NBC’s “Meet the Press” that he believes President Trump withheld military aid to Ukraine to “encourage” its government to investigate the Bidens, but that he will vote to acquit Trump on Wednesday because he believes the consequences of the president’s actions should be decided in the next election.

“If you have eight witnesses who say someone left the scene of an accident, why do you need nine? I mean, the question for me was: Do I need more evidence to conclude that the president did what he did? And I concluded no.”

Pressed on whether an acquittal would embolden Trump to continue to solicit foreign election interference, Alexander responded: “I hope not.”

Lamar Alexander’s position seems to be that Trump improperly withheld aid to pressure Ukraine to interfere in the election, but Trump’s removal from office is unnecessary because his fate will be decided by the election he’s trying to rig—and voters shouldn’t hear the witnesses.

ALEXANDER: If a call like that gets you an impeachment, I would think he’d think twice before doing it again

CHUCK TODD: What example is there from Trump’s life of him ever being chastened

ALEXANDER: … I haven’t studied his life that close pic.twitter.com/UFyf4zA69X