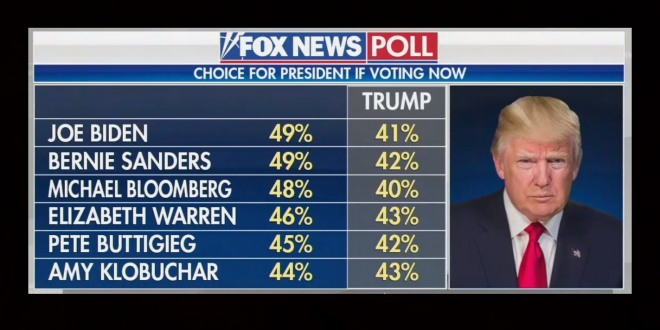 Among all voters, all six Democratic candidates tested top the president in trial ballots. Trump trails Biden and Bloomberg by 8 points and Sanders by 7. Those are the only leads outside the poll’s margin of error. Warren (+3 points), Buttigieg (+3) and Klobuchar (+1) are barely ahead. And in each instance, there are enough undecided/third-party voters to move the race either way.

Worst Polls, just like in 2016 when they were so far off the mark, are the @FoxNews Polls. Why doesn’t Fox finally get a competent Polling Company?

To the people of South Carolina, Tom Steyer is a joke, laughed at by everyone, a total incompetent. He made money in coal, now he “hates” coal. Did you see him fawning over Crazy Bernie? Has no chance, a loser for South Carolina, doesn’t deserve your vote!

“You go around Pennsylvania and you see Trump signs everywhere. The Donald Trump situation is bigger than the Reagan Revolution. Donald Trump has inspired us.” @RjHarris15 WHP580

Will be in the Great State of South Carolina tonight, 7:00 P.M., for a really BIG Rally. Best place to be is a Trump Rally. See you later!