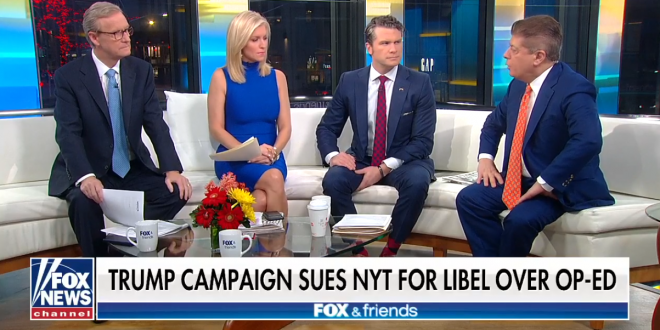 The Trump campaign’s filing of a libel lawsuit against the so-called “extremely biased” New York Times was a “clever” move but the case will likely be “dismissed,” according to Fox News senior judicial analyst Judge Andrew Napolitano. “They did a bad thing,” Trump said at a coronavirus press conference later Wednesday, before hinting at more litigation. “There will be more coming. There will be more coming.”

“First of all, opinion is protected,” Napolitano told “Fox & Friends” on Thursday. He continued, “The president’s point is: this is an opinion — it’s not an opinion, it was presented as fact.” Napolitano went on to say, “If it is an opinion, the case goes away because your opinion can be anything you want. The doctrine is called a fair comment. It was actually, I think, a clever way of expanding libel law but I don’t think it will succeed.”