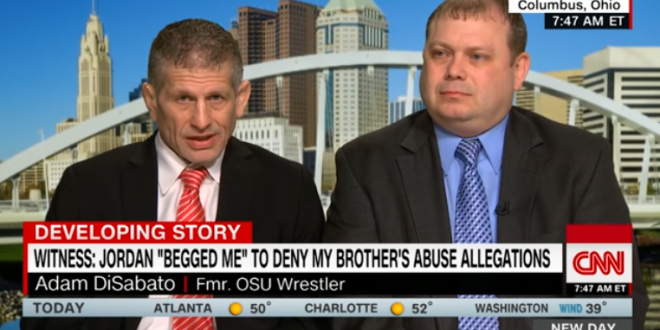 A former Ohio State University wrestler accused Rep. Jim Jordan on Friday of lying about not knowing of sexual abuse allegations against a university doctor during his time as an assistant coach there 25 years ago. Adam DiSabato told CNN Friday that he had reported the complaints about the late Dr. Richard Strauss, who was accused of assaulting student athletes during their medical examination, to Jordan and the team’s head coach during the time of the alleged abuse.

“I think it’s a boldface lie because Dunyasha Yetts went to (Jordan) and told him about an exam to his face. And it’s been documented. There are several people who went up to him. We all complained,” DiSabato told CNN’s Alisyn Camerota on “New Day,” claiming that the allegations about Strauss “was open discussion in the locker room.” Yetts was a fellow wrestler who who has publicly alleged abuse at Strauss’ hands.

The guy he is talking about is Republican Jim Jordan. The ranking member of HOUSE OVERSIGHT pic.twitter.com/MFwU0Qt53T