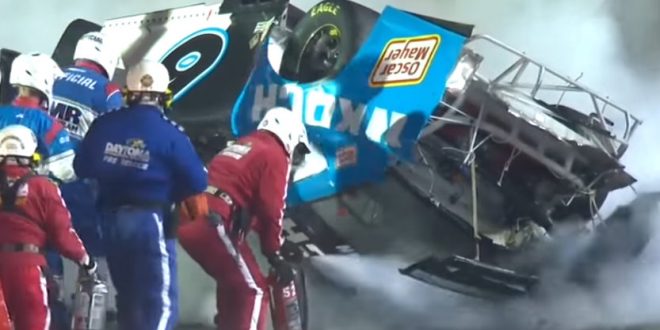 Denny Hamlin won the Daytona 500, which took two days to complete due to inclement weather and was started by President Donald Trump, but the 62nd version of the race will mostly be remembered for the grizzly wreck involving Ryan Newman on the final lap.

The frightening crash occurred when teammate Ryan Blaney nudged Newman’s No. 6 car ahead of Hamlin on the backstretch.

But extra contact forced Newman to spin out, as his car flung violently into the wall and flipped into the air before being hit hard again by Corey LaJoie as he crossed the finish line. Newman’s car landed on its roof and skidding across the track.

Newman’s car was  sent flying into the air after being struck by Go Fas Racing’s Corey LaJoie. Several ambulances sped onto the circuit to attend to Newman’s stricken vehicle following the crash. Black screens were erected around the site of Newman’s car as workers extracted the driver from the wreck.

Praying for a son of South Bend tonight, as we all wish the best for @RyanJNewman and his family after today’s devastating accident. https://t.co/SCEMih5H8Y

A stretcher is next to Newman’s car. Crews are using black screens to keep fans from seeing. And media has just been told to leave the pits. #DAYTONA500 pic.twitter.com/OFFIpTWcoz