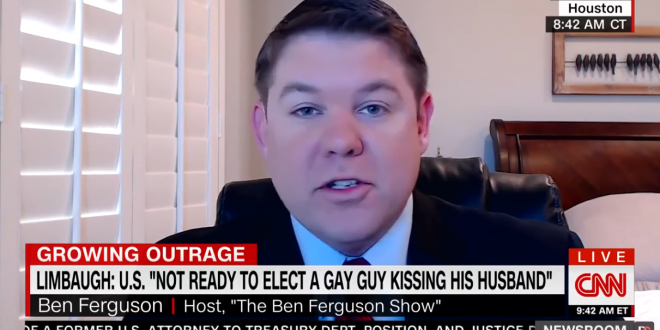 “Is anybody going to look masculine next to Donald Trump on stage? I think the only Democrat out there would be Joe Biden. Do I think it should matter on the issue of his sexuality? No. Now, I do think and I talked about this on my radio show literally yesterday with only Democrats calling in, does it matter that he is an openly gay man?

“There was a surprising number of Democratic voters that said that it was an issue for them, the same way we saw that lady try to take back her vote in Iowa after she voted and found out that Mayor Pete was gay. Now for me personally, I have no problem with him being a gay man.

“I can debate him on the issues, it has nothing to do with sexuality. And the reality here, I think is what Limbaugh was talking about, and again the way he said it is different than I would obviously say it.

“I was with the president last week in the Oval and I promise you he looked more masculine next to me than I did, and I consider myself to be a pretty masculine guy. We’re talking about appearance here.” – CNN contributor Ben Ferguson.

Watch the clip, especially the part where CNN anchor Jim Sciutto asks whether it was masculine for Trump to dodge the draft, compared to Buttigieg, who volunteered for military service. Boom.

Previous Experts: Time Is Running Out To Stop A Dictatorship
Next Hope Hicks To Make WH Return As Kushner Advisor