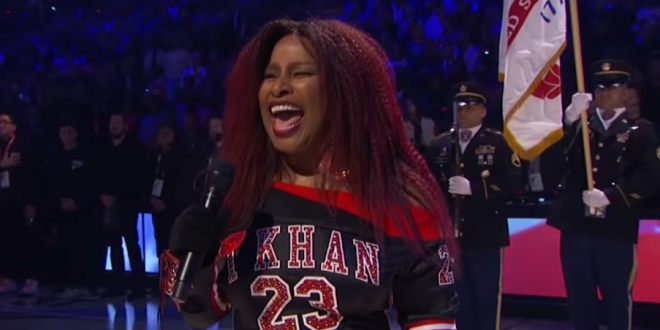 It takes a lot to make a performance of “The Star Spangled Banner” before the NBA All-Star Game trend higher on social media than the game itself, but Chaka Khan has managed what Fergie was able to two years ago, with a unique rendering of the National Anthem that threatened to render anything that followed an afterthought.

In 2018, Fergie seemed to almost be sex-ing up the anthem, performing it in a style some compared to Marilyn Monroe. Khan wasn’t doing anything nearly that conceptually risible, but she did bring a level of extreme melisma to her reading that not everyone seemed able to follow, to say the least.

We feel for you, Chaka Khan. Wearing what appeared to be a customized Chicago Bulls top sporting Michael Jordan’s retired No. 23, Khan offered up some of the vocal riffs and runs that she’s known for.

It’s a terrible song anyway. It glorifies war, it’s almost impossible for non-professionals to sing, and then there’s those verses in praise of slavery. Poor Chaka.