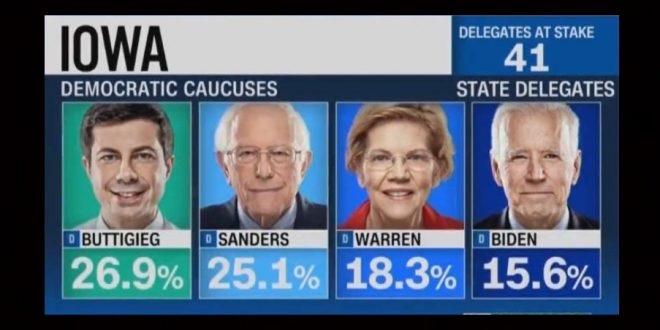 Pete Buttigieg, the former mayor of South Bend, Indiana, held a narrow lead in the Iowa caucuses on Tuesday night, according to a partial release of a majority of the results by the state Democratic party a day after an embarrassing organizational breakdown that marred the biggest night of the election year so far.

Buttigieg was trailed closely by the Vermont senator Bernie Sanders and the Massachusetts senator Elizabeth Warren with former vice-president Joe Biden in a distant fourth place, based on a tally of 62% of the precincts reporting.

Iowa awards only 41 delegates, who eventually nominate the Democratic presidential candidate at the party’s national convention in July, which represents around just 1% of the national total.

BREAKING: With 62% of precincts reporting, Pete Buttigieg has 27% of the vote, and Bernie Sanders has 25%, according to the Iowa Democratic Party. https://t.co/q1rhfB1jqP