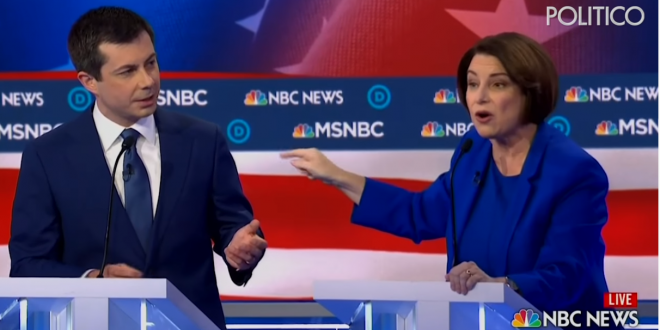 The hostility building between the two Midwestern Democrats burst dramatically into the open in Nevada, as they clashed repeatedly on the debate stage and tried to slash the momentum out of each other’s campaigns. Klobuchar and Buttigieg have fought before over their experience and their political records in past debates — but the feud took a deeply personal turn.

Amy Klobuchar dished sarcastic barbs at Pete Buttigieg before leaving her debate podium Wednesday night without shaking his hand. “I wish everyone were as perfect as you, Pete,” she mocked the former mayor of South Bend, Indiana, at one point in Las Vegas.

Buttigieg had just wrapped up delivering a message in Spanish, after criticizing the Minnesota US senator for her 2007 vote in favor of making English the national language in America.

He also chided her for supporting the nomination of Kevin McAleenan for commissioner of the US Customs and Border Protection, whom Democrats criticized for splitting children from their parents at the border.

Still thinking about Amy Klobuchar saying to Pete Buttigieg: “I wish everyone was as perfect as you Pete.”

That came from a deep place.

Amy Klobuchar is saying out loud what she really thinks of Pete Buttigieg: “You’ve not been in the arena doing that work, you’ve memorized a bunch of talking points and a bunch of things.”