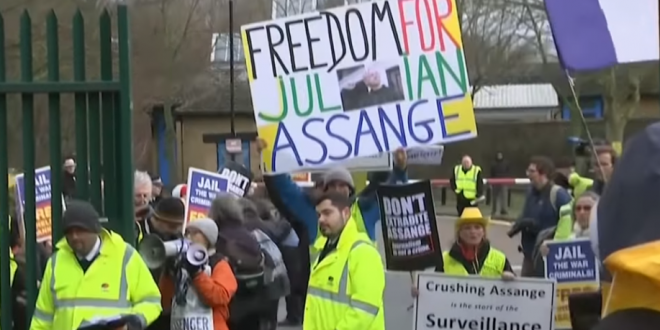 There was no room inside for the hundreds who had turned up to support Julian Assange, but the the sound of their chants in support of the WikiLeaks founder could be heard throughout the long-awaited extradition hearing at Woolwich crown court.

At an early stage, perhaps as much in hope as anything else, the presiding judge, Vanessa Baraitser, had sent court staff outside to speak Assange’s supporters, adding that the noise could interfere with her ability to hear the case properly.

It was to no avail, but James Lewis QC nevertheless pressed on, outlining the US case for why the Australian should be extradited to America to face trial on 18 charges of attempted hacking and breaches of the country’s espionage laws.

The United States government began laying out its extradition case against Julian Assange, the WikiLeaks founder, in court on Monday by arguing that he had put lives at risk and was no better than an “ordinary” criminal.

“Reporting or journalism is not an excuse for criminal activities or a license to break ordinary criminal laws,” James Lewis, a lawyer representing the U.S. government, told the court.

Mr. Assange has been indicted on 17 counts of violating the Espionage Act for his role in obtaining and publishing secret military and diplomatic documents and he could face as many as 175 years in prison if found guilty on all charges. His lawyers will begin presenting their defense later in the week.