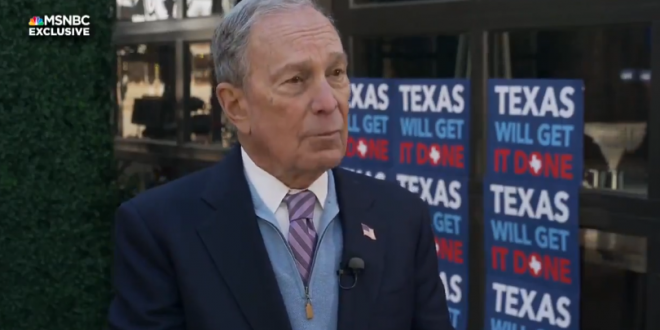 Bloomberg: I’m In “Right To The Bitter End” Unless Bernie Sanders Happens To Get The Majority [VIDEO]

Billionaire Democratic presidential candidate Mike Bloomberg said Thursday he will stay in the presidential race “right to the bitter end” as long as he’s got a chance at winning the nomination.

In an interview with NBC News’ Kasie Hunt, Bloomberg said “as long as you have a chance of winning,” he would “absolutely” stay in the race.

“Why would I spend all of this money, all of this time out of my life, and wear and tear, you know, which I love — incidentally, (it) reminds me of my three campaigns in New York for mayor, which I did like,” he told Hunt, the host of “KasieDC.”

“I am going to stay right to the bitter end, as long as I have a chance,” @MikeBLoomberg tells @Kasie in an exclusive interview. “If Bernie Sanders were to get a majority, then of course not…you got to be in it to win it.”