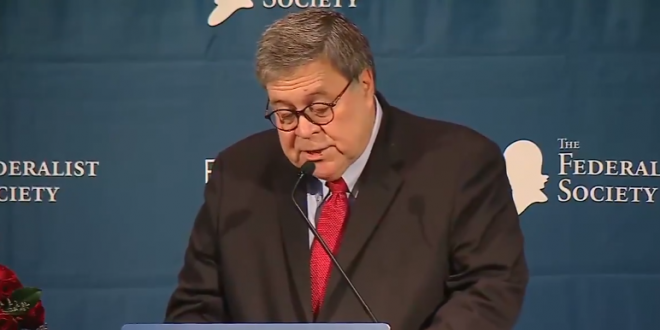 Bill Barr Pretends To Be Upset About Trump”s Anti-DOJ Tweets, Claims He Will Not Be “Bullied Or Influenced”

Attorney General William P. Barr pushed back hard Thursday against President Trump’s criticism of the Justice Department, saying, “I’m not going to be bullied or influenced by anybody.” In an interview with ABC News, Barr said the president’s highly critical tweets aimed at the department “make it impossible for me to do my job.” Barr said he was prepared to accept the consequences of speaking out against the president.

“I cannot do my job here at the department with a constant background commentary that undercuts me,” the attorney general said. Barr has faced growing scrutiny since Tuesday, when four prosecutors handling the case of President Trump’s longtime friend Roger Stone withdrew from the proceedings. Democrats called earlier this week for the inspector general to investigate the dispute surrounding Stone’s sentence recommendation.