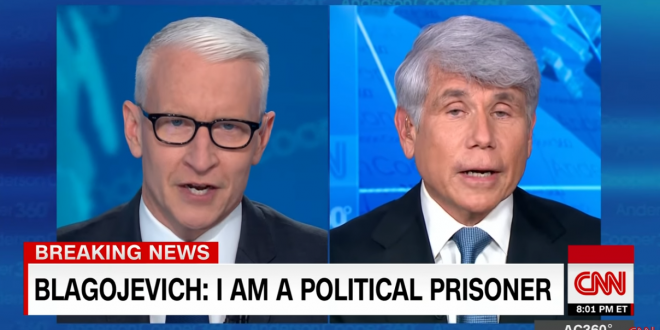 Former Illinois Gov. Rod Blagojevich on Friday declared himself a “political prisoner” in a contentious interview with CNN’s Anderson Cooper over the substantial evidence prosecutors used to convict him on a host of public corruption charges.

Blagojevich’s sentence was commuted earlier this week by President Donald Trump after the Democrat and former “Celebrity Apprentice” contestant had served eight years of a 14-year sentence for pay-for-play crimes.

Blagojevich on Friday defiantly rebuked critics of his commutation, who have pointed to the considerable charges that landed him in prison. “I don’t think they’ve looked carefully because I am a political prisoner,” he said.

Anderson Cooper clashed with former Illinois Gov. Rod Blagojevich (D) in a heated interview Friday night, with Cooper calling “bullshit” on Blagojevich as they talked about his prosecution. The arguing escalated after Blagojevich alleged he was the target of “corrupt prosecutors” when he was charged with corruption, including attempted extortion.

“It’s a little ironic and frankly a little sad and pathetic and hypocritical you talking about getting a commutation of a sentence, which is within the president’s right, but you ignored a whole hell of a lot of other people who were hoping you might give them clemency when you actually mattered,” Cooper said.

In which @AndersonCooper calls actual “bullshit” on Blagojevich in fiery interview pic.twitter.com/8oorGogs7s

Anderson Cooper went to TOWN on Rod Blagojevich: “you have an obligation…to admit what you did was wrong…you’re creating a whole new alternate universe of facts and that may be big in politics today, but it’s still frankly just bullshit.” pic.twitter.com/87c1Fkg0rN

Anderson Cooper is a legend. pic.twitter.com/4YYwmJVF2a