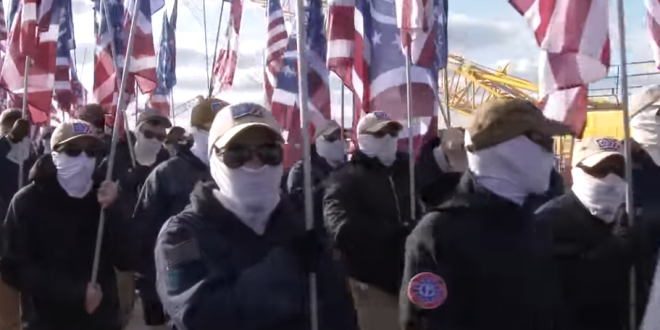 A march by the white nationalist group Patriot Front was done near Union Station in Washington around 4 p.m. on Saturday.

The members of Patriot Front that were marching shouted, “Reclaim America” as they moved down the streets of D.C. The group would later end their march at a Walmart in the Union Station area, as some onlookers called them cowards.

The group, according to the Southern Poverty Law Center, is an image-obsessed organization that rehabilitated the explicitly fascist agenda of Vanguard America with garish patriotism. Patriot Front formed as a white nationalist hate group following the “Unite the Right” in August 2017 that left one woman dead in Charlottesville, Virginia.

Video of Saturday’s march in Washington posted on the News2Share Facebook page showed occasional hecklers, but there appeared to be no organized counter-protest movement waiting for the Patriot Front as the group marched from the Lincoln Memorial to the U.S. Capitol grounds and later a nearby Wal-Mart parking garage.

They were accompanied by dozens of police, some on bicycles, but it was unclear whether the group had obtained a permit for the march. A spokeswoman for District of Columbia Metropolitan Police said it had no record of a permit for the march. Capitol Police and the National Park Service could not immediately be reached for comment.

Photos of the Neo Nazi protest in Washington DC today…

Members of the Patriot Front marched from the National Mall, past the Capitol, ending near Union Station.

Patriot Front is run by Thomas Ryan Rousseau, who founded the group in 2017, as a teenager.@WUSA9 @washingtonpost pic.twitter.com/0CLOqEtIz5

White nationalists shouting “RECLAIM AMERICA” through my neighborhood.
This isn’t Charlottesville.
This is Washington, DC.

“They killed Heather Heyer!” chanted antifa. The white nationalists tried to drown it out by chanting “reclaim America.”

To be clear, “Patriot Front” indeed broke off from “Vanguard America” which James Alex Fields was affiliated with at “Unite the Right” in Charlottesville. pic.twitter.com/BMyg9yJ0ID

So – for a brief, unusual few minutes – only white nationalists and the police occupied the entire United States Capitol grounds on the outdoor west side. pic.twitter.com/8u4CiiUIYs

Today in DC a swarm of 150 white nationalists with the group “Patriot Front” marched through Washington DC.

Only a handful of antifa came out to oppose them, and both sides were mightily outnumbered by the police escort.

Here’s my @N2Sreports story about today, featuring my both live and HD videos as well as photos by @zdroberts.https://t.co/OZfwhowE5Y

The white nationalists then ran into a Walmart parking garage, where police blocked anyone else from entering. pic.twitter.com/e5j37vooxb