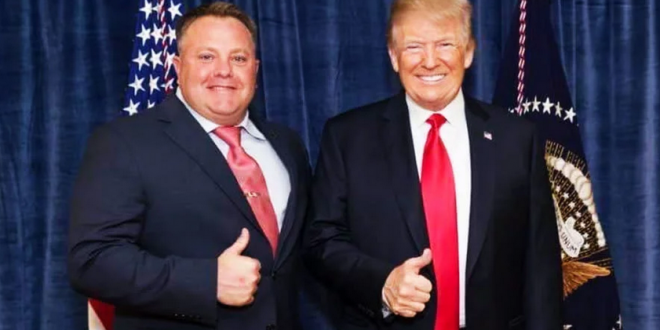 WE DON’T KNOW HIM: Top GOP Leaders Backpedal From Man Alleged To Have Menaced US Ambassador

Congressional Republicans are distancing themselves from Robert Hyde, a controversial House candidate and GOP donor who has become the latest figure to get wrapped up in the Ukraine saga that led to President Donald Trump’s impeachment.

The top three Republican leaders in the House — Minority Leader Kevin McCarthy of California, Minority Whip Steve Scalise of Louisiana and GOP Conference Chairwoman Liz Cheney of Wyoming — all said they don’t know Hyde and don’t support him, according to their offices.

And the Republican Party chairman in Connecticut, where Hyde is one of several Republicans vying to challenge Democratic Rep. Jahana Hayes this fall, is calling on Hyde to drop out of the race.

I have asked Rob Hyde to end his bid for Congress. His campaign is a distraction for the Democrats to raise money and falsely label all Republicans with his antics. In my view he is not helping other Republican candidates or @realDonaldTrump win. #ctpolitics

The CT GOP is refunding donations provided by Mr. Rob Hyde in light of his vile comments on Twitter.

JR RINO should resign from the @CTGOP ASAP. Never did anything but rig elections including his own and was a staunch advocate against @realDonaldTrump and still is.

#hydeforcongress phone pop-ups have arrived. Please message us if you donated for them and we will match up and send to you ASAP. Thank you for your continued support. #hyde2020 #robertfhyde pic.twitter.com/husddb5d67

BREAKING: The Soros bots are attacking @rfhyde1 in MASSES today over Yovanovitch! What are they trying to get in front of? My guess is Yovanovitch is in deep SHIT. More to come. #MAGA #Qanon #WWG1WGA https://t.co/WI6ibnqTdu

Oh looky here @GOPLeader Rep Kevin McCarthy!
Here’s you & Trump’s felon pals!
Then you were with Connecticut candidate Hyde now accused of attempted assassination of Ukraine Ambassador?
My you’ve been busy!
Looks like you may be target of investigation? https://t.co/v3C3f4MLY2 pic.twitter.com/YwrAQKA9B0

And- also- 👀👇here is McCarthy with Levs other partner in crime- Mr Hyde of “stalking Ambassador to Ukraine” text messages news today pic.twitter.com/GulrJhHeWE