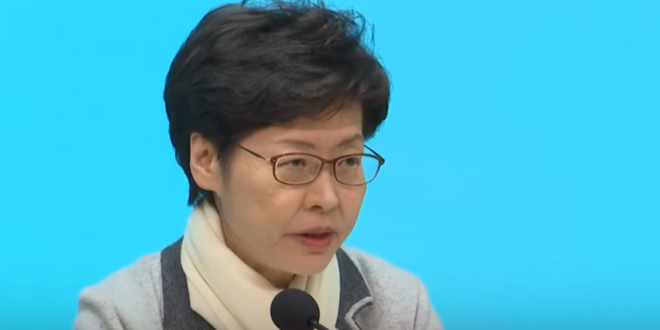 The virus-hit Chinese city of Wuhan, already on lockdown, banned most vehicle use downtown and Hong Kong said it would close schools for two weeks as authorities scrambled Saturday to stop the spread of an illness that has infected more than 1,200 people and killed 41.

Hong Kong leader Carrie Lam [photo] said her government has declared the outbreak an emergency and will close primary and secondary schools for two more weeks on top of next week’s Lunar New Year holiday. They will re-open Feb. 17.

She said that direct flights and trains from Wuhan would be blocked. The outbreak began in the city in central China and has spread nationwide and overseas, fueled by millions of people traveling during the country’s biggest holiday.

The United States is arranging a charter flight on Sunday to bring its citizens and diplomats back from the Chinese city of Wuhan, epicenter of the outbreak of a new coronavirus, the Wall Street Journal reported on Saturday.

The plane, with around 230 people, will carry diplomats from the U.S. consulate as well as U.S. citizens and their families, the Journal reported, citing a person familiar with the operation.

Washington was given approval for the operation from China’s Foreign Ministry and other government agencies following negotiations in recent days, the newspaper said.