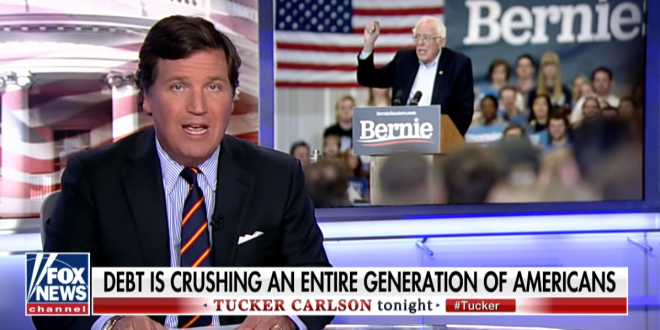 “Among lower-income Republicans, 47 percent said economic conditions were hurting them. Just 30 percent said they were helping. Now, keep in mind, these aren’t sociology professors from the Oberlin faculty lounge. This is the president’s core, it’s his base. For a lot of middle class people, wages aren’t keeping pace with expenses. Child care, housing, education, health care — they’re all getting more expensive by the year.

“Bernie Sanders may get the Democratic nomination. And if he does, every Republican in Wasington will spend the next ten months reminding you that socialism does not work and never has. And they’ll be right, obviously. But if Sanders pledges to forgive student loans, he will still win many thousands of voters who went for Donald Trump last time.

“Why? Because debt is crushing an entire generation of Americans. Republicans need to make a plan to make it better, or they will be left behind.” – Fox News host Tucker Carlson, on last night’s show.