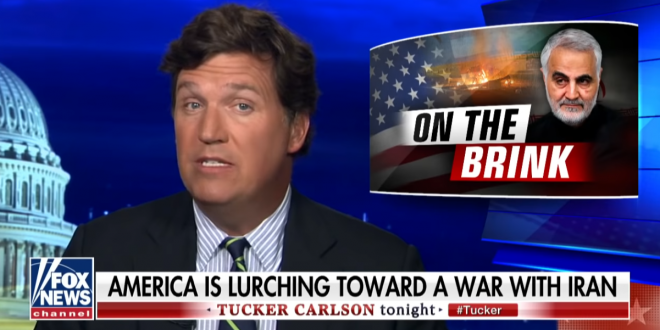 One of the most prominent figures on Fox News isn’t joining in on the cheerleading of President Donald Trump’s assassination of Iran’s most important military leader. During his show on Friday, host Tucker Carlson delivered a lengthy monologue criticizing the escalation of tensions with Iran sparked by the killing of Iranian Quds Force commander Qassem Soleimani, who died in a U.S. airstrike in Iraq on Thursday.

“Washington has wanted war with Iran for decades,” Carlson said. “They still want it now. Let’s hope they haven’t finally gotten it.” Carlson largely avoided criticizing Trump directly. But he singled out many of the administration’s current and former national security hawks, including Mike Pompeo and John Bolton. He also admonished Sen. Ben Sasse, mocking the senator’s statement that the circumstances leading to Soleimani’s death were “very simple.”

“What happened yesterday wasn’t just another symbolic bombing,” Carlson warned on “Tucker Carlson Tonight.” “It was a pivot point. Neocons in Washington understood that immediately.”In remarks earlier Friday, Trump accused Soleimani of planning “imminent and sinister attacks” on U.S. interests. Carlson argued that many pro-war U.S. officials refuse to look at the important questions when it comes to conflicts in the Middle East.

“No one in Washington is in a mood for big-picture questions right now. Questions, the obvious ones like: Is Iran really the greatest threat we face? And who’s actually benefiting from this? And why are we continuing to ignore the decline of our own country in favor of jumping into another quagmire from which there is no obvious exit?” Carson said. “By the way, if we’re still in Afghanistan 19 years, sad years later, what makes us think there’s a quick way out of Iran … ?”