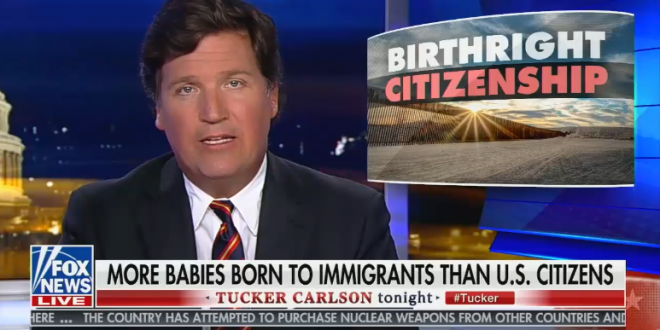 “Under current American law, every person born on our soil automatically becomes a citizen. It doesn’t matter if their parents are tourists to this country are here illegally, or even spies seeking to undermine our country. Congress can change that law, obviously, but they don’t actually care so they won’t. What effect does it have? Well, according to the Center for Immigration Studies, last year about 372,000 anchor babies were born in the United States.

“Their parents had no legal right to be here. Those children allow their parents though to qualify for a whole suite of welfare benefits and of course, their parents will never be forced to leave the country. That’s just one of the many ways that America’s open borders have turned into a disaster for this country.” – Fox News host Tucker Carlson, on last night’s show.