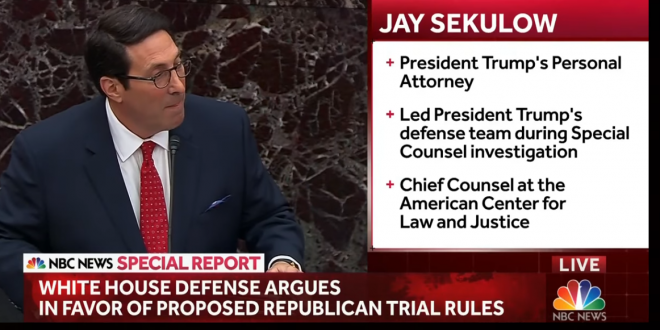 In 1990, Pat Robertson, the erstwhile Republican presidential candidate and Christian Broadcasting Network founder, placed Sekulow at the helm of a new, Robertson-founded entity, the American Center for Law and Justice.

The organization’s stated aim was to act as a counterweight to the American Civil Liberties Union, and the group went as far as to craft the name to have an abbreviation just one letter different than that of the longtime civil rights legal organization.

Sekulow and the ACLJ have been intensely opposed to laws protecting the rights of LGBTQ people in the U.S. and abroad. The ACLJ argued on behalf of state laws criminalizing gay sex that were overturned by the Supreme Court in 2003. Sekulow has said that the state has a “compelling interest to ban the act of homosexuality.”

The ACLJ and its international affiliates engage in anti-LGBTQ and anti-choice culture wars in the U.S., Africa, Europe and Russia. In Africa, it worked to shape constitutional language in Zimbabwe, where it has fought to maintain criminalization of homosexuality.

Sekulow and his son Jordan opened affiliated offices of the ACLJ in Africa to lobby politicians to “take the Christian’s views into consideration as they draft legislation and policies,” according to ACLJ’s website. ACLJ’s Zimbabwe office has pushed an agenda that backs outlawing same-sex marriage and making sure that homosexuality “remain[s] a criminal activity.” (Zimbabwe had outlawed homosexuality in 2006.)

Zimbabwean president Robert Mugabe is among the most ruthless dictators in the world—but in 2010 ACLJ-Zimbabwe’s chairman, pastor Alex Chisango, led Mugabe and others in prayer to kick off Zimbabwe’s constitutional reform drive. ACLJ wanted to ensure that, whatever else changed in the country’s constitution, homosexuality remained illegal and same-sex marriage was banned.

Documents obtained by the Guardian show Sekulow approved plans to push poor and jobless people to donate money to his Christian nonprofit, which since 2000 has steered more than $60 million to Sekulow, his family and their businesses.

Telemarketers for the nonprofit, Christian Advocates Serving Evangelism (Case), were instructed in contracts signed by Sekulow to urge people who pleaded poverty or said they were out of work to dig deep for a “sacrificial gift”.

“I can certainly understand how that would make it difficult for you to share a gift like that right now,” they told retirees who said they were on fixed incomes and had “no extra money” – before asking if they could spare “even $20 within the next three weeks”.