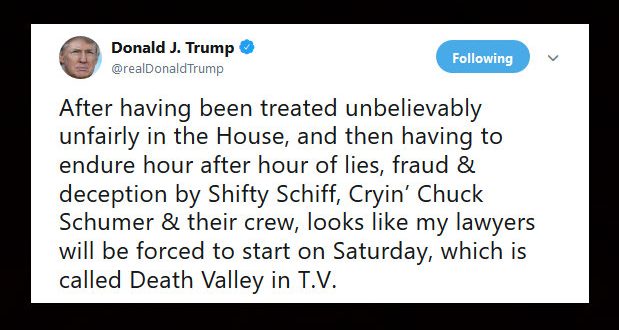 President Donald Trump, flashing the fixation of a former reality television showman, lamented Friday that his impeachment defense team was being forced to present its case during the “Death Valley” of broadcast time slots. The president’s complaint represents yet another indication of his eagerness for a captivating, media-minded showing by the squad of conservative attorneys arguing against his removal from office.

The House impeachment managers, led by Rep. Adam Schiff, are set to conclude on Friday their third and final day of arguments advocating for Trump’s removal from office. Beginning Saturday, the president’s legal team will be similarly afforded 24 hours to address senators over the course of three calendar days, although some of Trump’s allies on Capitol Hill have suggested his lawyers may not use all of their allotted time.

After having been treated unbelievably unfairly in the House, and then having to endure hour after hour of lies, fraud & deception by Shifty Schiff, Cryin’ Chuck Schumer & their crew, looks like my lawyers will be forced to start on Saturday, which is called Death Valley in T.V.