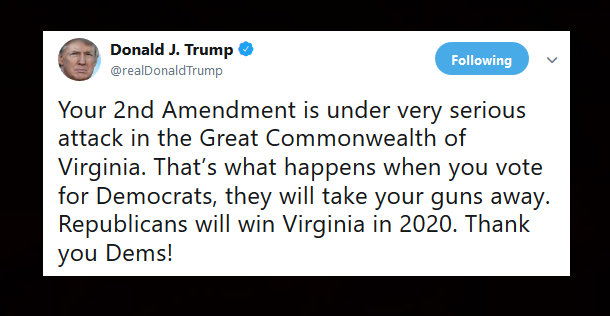 Trump Rips Dems On Guns Ahead Of Virginia Gun Rally

President Donald Trump took aim at Virginia Democrats and their push to stiffen the state’s gun laws, saying that the U.S. Constitution was under attack just as thousands of armed militia members began arriving in Richmond for a Monday gun rally.

Trump doubled down with his support of gun enthusiasts in the state, which Hilary Clinton won in 2016 and where Democrats took full control of the state legislature for the first time in a generation in November, as candidates made passing stronger gun control laws a central campaign theme.

Militias, neo-Nazis and other groups have vowed to swarm the capital and police are expecting several thousand people at the pro-gun rally on Monday.

Your 2nd Amendment is under very serious attack in the Great Commonwealth of Virginia. That’s what happens when you vote for Democrats, they will take your guns away. Republicans will win Virginia in 2020. Thank you Dems!