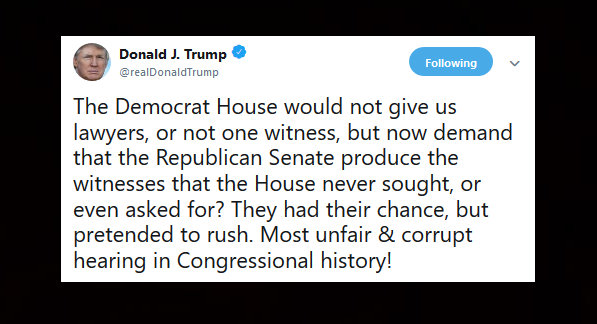 President Donald Trump raged against the ongoing Senate impeachment trial in a Thursday morning tweetstorm in which he lamented the process as “unfair” and “corrupt.” That post, one of eight tweets from Trump within a 20-minute span, contained multiple misleading assertions or falsehoods.

While Trump was denied the ability to have an attorney present during the House Intelligence Committee hearings, a lawyer for House Republicans, Steve Castor was permitted to question witnesses.

Additionally, House Judiciary Committee Chairman Jerrold Nadler, D-N.Y., invited Trump to have an attorney present for his committee’s portion of the investigation, but White House Counsel Pat Cipollone declined the offer. In total, five witnesses requested by Republicans testified in the proceedings.

The Democrat House would not give us lawyers, or not one witness, but now demand that the Republican Senate produce the witnesses that the House never sought, or even asked for? They had their chance, but pretended to rush. Most unfair & corrupt hearing in Congressional history!