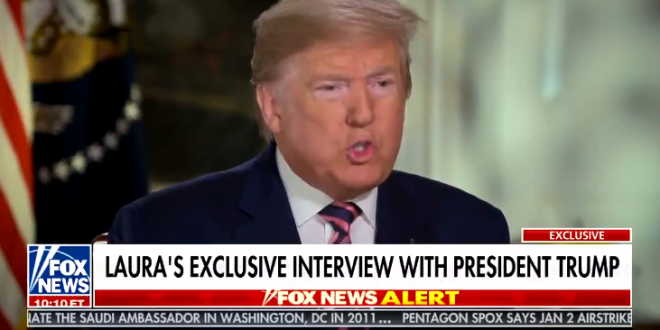 Trump: Iran Was Planning To Attack Four US Embassies

President Trump said on Friday that Iran had planned to attack multiple embassies across the Middle East, including the American Embassy in Baghdad, after first asserting that he did not believe anyone had a right to more details on the intelligence that prompted the killing of an Iranian general.

“I can reveal that I believe it probably would’ve been four embassies,” Mr. Trump told Laura Ingraham of Fox News in an interview, without giving further information.

The president’s assertion came after a week in which he and his advisers avoided offering specifics about the intelligence that prompted him to order an airstrike last week that killed Maj. Gen. Qassim Suleimani, one of Iran’s most important generals.

Trump now tells Laura Ingraham four embassies were involved in the plots, per a clip that just aired on Fox News. Yesterday, he said singular embassy, last night mentioned multiple and now is more specific than his national security aides have been, though doesn’t say which ones.

“President Trump said today that an Iranian general killed by a US drone strike was planning attacks on four US embassies, a claim made to justify the decision but one at odds with intelligence assessments from senior officials in Trump’s administration.”https://t.co/dfX4krg5af

“I feel like I would have remembered if they would have presented that kind of intel at the briefing,” Sen. Chris Murphy said of Trump’s embassy claim. “It sounds to me like the admin is panicking a little bit about the soundness of their rationale.”https://t.co/64PeANlbF0

Fascinating dimension of the Trump era: all news orgs now hitting live with Trumps claim about four embassies and considering it as claim to be litigated even while simultaneously everyone universally understands he made this up on the spur of the moment.