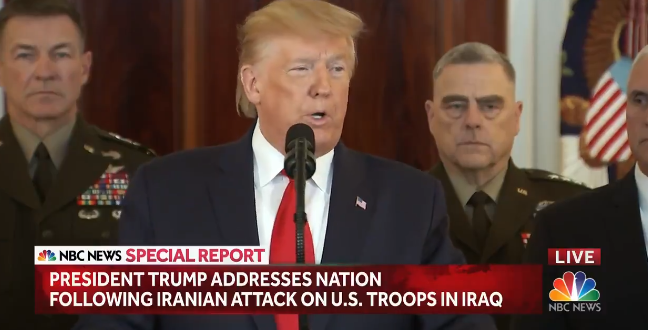 Trump: “Iran Appears To Be Standing Down” [VIDEO]

President Donald Trump said on Wednesday that Iran “appears to be standing down” after its missile attack on U.S. targets in Iraq, and he vowed to keep up the pressure on Tehran with “punishing” new economic sanctions.

Trump made the comments in an address to the nation Wednesday from the White House less than a day after Iran fired more than a dozen ballistic missiles at two Iraqi air bases housing U.S. forces in retaliation for the killing of a top general.

“Iran appears to be standing down, which is a good thing for all parties concerned and a very good things for the world,” Trump said. He added that “no American or Iraqi lives were lost” in the Iranian attacks, “because of the precautions taken, the dispersal of force and an early warning system that worked very well.”

President Trump: “No Americans were harmed in last night’s attack… We suffered no casualties. All of our soldiers are safe and only minimal damage was sustained… Our great American forces are prepared for anything. Iran appears to be standing down…” https://t.co/fiz0R8KlLr pic.twitter.com/KmVZxZWCwt