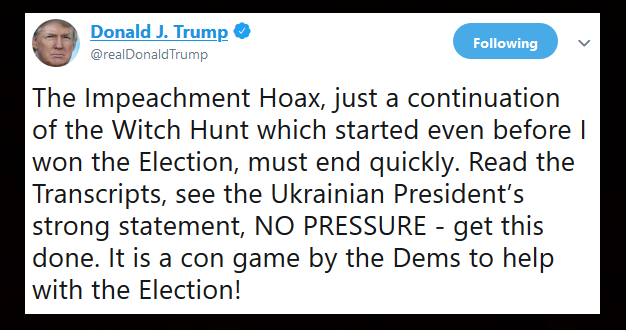 Trump has again weighed in on the looming impeachment trial over Twitter, dismissing the controversy as a “con game” and calling for a rapid end to the matter.

House speaker Nancy Pelosi has not yet transmitted the aricles of impeachment to the Senate, but many expect her to do so this week. Senate majority leader Mitch McConnell has made clear the delay will not affect his handling of the trial.

Once the articles are transmitted, the Republican-controlled Senate will need to determine the parameters of the trial, which is expected to end in the president’s acquittal.

The Impeachment Hoax, just a continuation of the Witch Hunt which started even before I won the Election, must end quickly. Read the Transcripts, see the Ukrainian President’s strong statement, NO PRESSURE – get this done. It is a con game by the Dems to help with the Election!

Congress & the President should not be wasting their time and energy on a continuation of the totally partisan Impeachment Hoax when we have so many important matters pending. 196 to ZERO was the Republican House vote, & we got 3 Dems. This was not what the Founders had in mind!