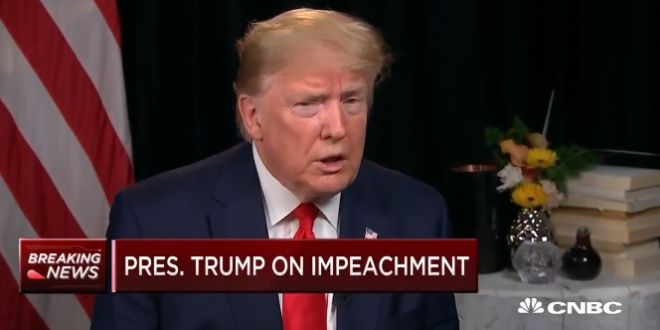 President Trump said he’s happy with the way the impeachment trial is going thus far because his administration has not released “materials” that would hurt his cause.

“When we released that conversation all hell broke out with the Democrats,” Trump said. “Because they said, ‘Wait a minute, this is much different than [what Adam Schiff] told us.’ ”

The president continued, “So, we’re doing very well. I got to watch [the impeachment trial] enough. I thought our team did a very good job. But honestly, we have all the material. They don’t have the material.”

In an incredible exchange at Davos, @realdonaldtrump admits he is comfortable with the status of the impeachment trial because the White House is withholding evidence. “Honestly, we have all the material. They don’t have the material.” As always, he says the quiet part out loud. pic.twitter.com/Gk3h1QZyAi