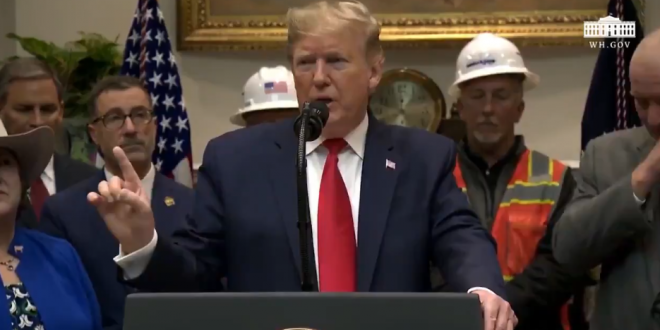 Trump Admits Climate Change Is Not A Hoax [VIDEO]

President Trump said during a White House briefing on Thursday that he is a “big believer” in climate change and that it is “not a hoax” soon after his administration announced a plan to overhaul an environmental policy act.

He then claimed, “The environment is very important to me. Somebody wrote a book that I’m an environmentalist called The Environmentalist… I’ll bring it to my next news conference, perhaps. I’m sure you’ll report all about it.”

President Trump, after announcing an overhaul of landmark climate rules, is asked if he thinks climate change is a hoax: “Nothing is a hoax about that. … I want clean air, I want clean water and I also want jobs. I don’t want to close up our industry” https://t.co/hJazICrM0v pic.twitter.com/GRnKzA4O45

Gutting this bedrock environmental law is a blatant attempt to prevent action addressing climate change and an attack on every neighborhood across the country. https://t.co/rhbFDP5xrx

The Trump Administration is dismantling another landmark environmental law for the oil and gas companies. It will increase pollution here and climate change worldwide. https://t.co/6YUAkYZoAK

Trump just announced changes to NEPA that will gut one of our most effective environmental laws.

It will allow federal agencies to ignore our climate crisis & make it harder for the public to challenge their actions.

This is a dangerous new proposal that must be stopped. pic.twitter.com/M6YD28a8UH

Asked if he thinks global warming is a hoax, Trump says, “Nothing’s a hoax. Nothing’s a hoax about that.” (He called it a Chinese hoax in 2012.) He then says someone wrote a book, which he has in the other room, called “The Environmentalist,” about how he is an environmentalist.

Such a book exists (hat tip to @Mister_Fun_Guy). The book pictured below was self-published in 2016. (Not sure if Trump was referring to that one or another one.) pic.twitter.com/t9RHjtpAXb