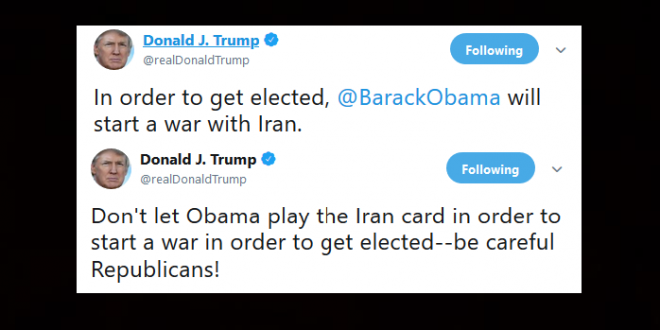 Tweets from back in 2011 and 2012 in which Donald Trump predicted that President Barack Obama would start a war with Iran to secure his reelection have gone viral after the US assassinated a top Iranian general, dramatically escalating its confrontation with Iran.

Trump personally ordered the killing by airstrike of Iranian Maj. Gen. Qassem Soleimani, who is believed to have died in the early hours of Friday near an airport in Baghdad.

Despite Trump’s evident pride at the attack, many on social media seized on his previous posts where, with Obama in the White House, Trump had condemned the idea of military action against Iran as foolish electioneering.

Now that Obama’s poll numbers are in tailspin – watch for him to launch a strike in Libya or Iran. He is desperate.

Don’t let Obama play the Iran card in order to start a war in order to get elected–be careful Republicans!

I predict that President Obama will at some point attack Iran in order to save face!