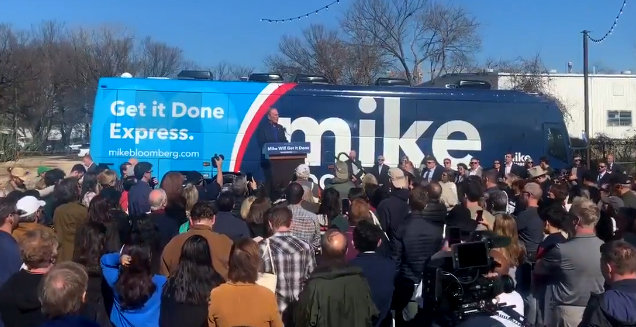 Mike Bloomberg slammed President Trump – as well as his Democratic rivals – Saturday as he kicked off what he called “Day One” of his run for the White House.

“Unlike everyone else in this race, I think what’s important is beating Donald Trump,” he told about 45 supporters at a restaurant in San Antonio. Protesters toting Trump 2020 and U.S. flags could be spotted through the eatery’s windows.

TV’s Judge Judy Sheindlin introduced Bloomberg with a dig at the left-wing Democrats running for the nomination. “Those that are touting revolution in this country are wrong,” she said. “It’s the best country on earth … It should have the greatest president.”

Judge Judy introducing Mike Bloomberg in San Antonio. “Those that are touting revolution in this country are wrong. It’s the best county on earth.” pic.twitter.com/zAYq7aJDpV

Several dozen people are waiting for the reveal of Bloomberg’s “Get it Done” bus here in San Antonio.

One woman tells staff: “You need to come up with a BloomBurger.” It would be in the same style as how Bloomberg eats his burgers. “If he even eats burgers,” she adds.

Bloomberg already talking general election here in San Antonio: “We’re fighting to win all of your 38 electoral votes
….We are going to finally turn Texas blue.”

Armed protestors are in San Antonio today to protest a Mike Bloomberg campaign stop. No background check, training or permit is required to open carry long guns in Texas.

Thank you for the incredible turnout, San Antonio! With supporters like ours, we can turn TX blue this November.

Next stop for the #GetItDone Express bus: Austin pic.twitter.com/tT5cdPpyxY

Previous Amash: Trump Is Selling Our Troops To Saudi Arabia
Next CHATTER AWAY: Overnight Over Thread