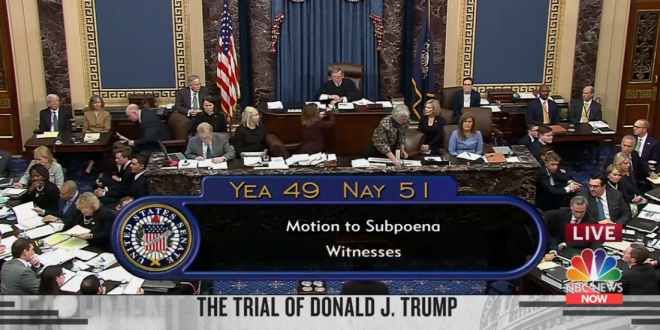 The Senate voted on Friday to block the consideration of additional witnesses and documents in President Trump’s impeachment trial, as Republicans shut down a push by Democrats to bring in new evidence and cleared the way for a swift acquittal in the coming days.

The nearly party-line vote came after a bitter, four-hour debate between the prosecution and defense over the merits of prolonging the trial by introducing new information that could shed additional light on Mr. Trump’s behavior or moving forward with the all but certain verdict.

The motion to consider new witnesses and evidence failed 49 to 51, with only two Republicans joining every member of the Democratic caucus in favor.

It’s official. The Senate votes 51-49 to NOT subpoena any witnesses or documents in the Trump impeachment trial. Republicans Susan Collins and Mitt Romney sided with Democrats in the losing effort.

They’re now in recess. Schedule on what comes next & timing of final vote is TBD.